From: Liam Mitchell, Associate Director of Communications, Office of Strategy, Communications and External Relations, Faculty of Medicine, University of Toronto 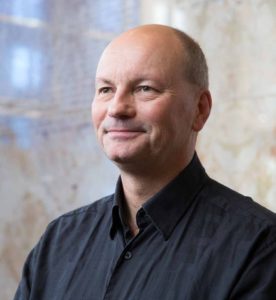 That is the question that has surrounded nurse Kaci Hickox since she returned to the United States from Sierra Leone where she treated Ebola patients. While some — notably New Jersey Governor Chris Christie — have insisted that she be quarantined for 21 days, others — including an editorial from the New England Journal of Medicine — have argued that position isn’t supported by the underlying science. The controversy has raised ethical considerations about when a quarantine is justified and how best to carry it out. Writer Liam Mitchell discussed the subject with University of Toronto bioethicist Dr. Ross Upshur (pictured right), who is a member of the World Health Organization expert panel on Ebola ethics. He is a Professor in the Department of Family and Community Medicine, the Dalla Lana School of Public Health and the U of T Joint Centre for Bioethics as well as Scientific Director of the Bridgepoint Collaboratory in Research and Innovation. He holds the Canada Research Chair in Primary Care Research.

What is a quarantine?

First it’s important to separate the ideas of “isolation” and “quarantine.” They’re often considered synonymous, but they’re not. “Isolation” is when someone who is known to be sick is separated from the general public. Just about every jurisdiction recognizes this as necessary to safeguard the public. A “quarantine” is when someone who has been exposed to an illness, but isn’t sick yet, is kept away from the general public during the incubation period to see if they become ill.

So why shouldn’t we quarantine everyone who has been potentially exposed to Ebola?

We know a lot about the transmission of Ebola. For example, we know that someone with Ebola doesn’t become infectious until after they first show symptoms of the disease. Fever is the first reliable sign of infection. So if someone who may have been exposed to Ebola regularly monitors his or her temperature, at the first sign of an increase in their temperature, they should be seek medical assessment and enter isolation if deemed necessary. Until that point, they don’t pose a threat to public health.

Can we trust everyone to accurately self-monitor and report their conditions?

This is an important point that I think was missed in the New England Journal of Medicine editorial. We assume returning health care workers will be reliable and truthful in their conduct, particularly with regard to symptom monitoring. However, until we have reason to believe people are being deceptive, we have to give them the benefit of the doubt. Once they are found to be deceptive, however, that’s when we can justify more stringent measures being taken.

Who makes the decision about whether isolation or quarantine is necessary?

In Ontario the decision to enforce isolation or quarantine is made by the Medical Officer of Health. I often say they are one of the most important positions in a democracy and also one of the most powerful. Under the Ontario Health Protection and Promotion Act, if a medical officer believes a communicable disease exists — or may exist — he or she has the power to order people detained, have a premises closed, order people be examined by a physician; a wide range of steps that may be necessary to protect the public. Although such powers are rarely used, it is important that they exist and that they be used judiciously. In addition, physicians have a duty to report people who are diagnosed with communicable diseases to the medical officer of health. This includes Ebola, but also TB, HIV/AIDS, West Nile and others. pdf link

When it’s determined a quarantine is necessary, what are the ethical considerations?

I had the opportunity to reflect on that after the SARS outbreak in Toronto. As someone with public health training, I was asked to join the York Region Public Health response to SARS and found myself on the frontlines enforcing quarantine orders. In that circumstance, we didn’t know a lot about SARS — how it spread, what was the incubation period — all things we know with Ebola. In a paper I wrote after that experience, I argued that there are four principles that should guide our action: the harm principle, proportionality, reciprocity and transparency. First, we should only take action to prevent a greater harm to society. Second, we should use the least restrictive or coercive means necessary. Third, we have a duty to ensure that those in quarantine receive appropriate care and ensure their needs are met. And finally, the decision made need to be clear and accountable.